There is a painting by John Henry Fuseli called the nightmare. Painted in 1781, the oil painting features a seemingly distraught woman laying pained on a bed. Draped in white cloth, she is burdened by a horse head lurking in the background and a demon seated upon her breast. Irrational? Pained? What does this painting mean?

Many impressionists have attempted to understand and recreate this painting, yet no image (in my humble, not artistic) opinion, has contained the emotion that this abstracted painting contains. The Nightmare invokes the relationship to nightmares — in previous generations, women were assumed to have sexual relations with the devil, when putting this into the context of modern men, this assumption does not seem to be far off.

A nightmare — an idea that describes a barbaric and abstracted mindset that keeps those who are meant to prosper held in the background. Fuseli fell in love with Anna Landholdt during his travels. Speaking of his fantasies, Fuseli stated,

“Last night I had her in bed with me— 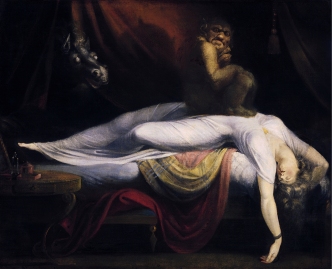 wound my hot and tight-clasped hands

about her—fused her body and soul

together with my own—poured into her

my spirit, breath and strength. Anyone

who touches her now commits adultery

and incest! She is mine, and I am hers.

Fuseli proposed to this woman which was met with disapproval from her father. Fusilli’ love was not reciprocated, for it appears to have been unrequited. Anna soon married a family friend. While a nightmare, many historians believe that this painting was a representation of a lost love.

Hands intertwined with mine, eyes matched with my gaze, our bodies move together weaved like thorns upon the neck of a rose. Minds connect as our eyes meet, but the heart stands empty. Fresh goodbyes are woven through intricately painted lies, for we started from the beginning as we attempted to forget our pasts.

As I watched you walk away into the darkness, I cannot help but note:

There is an extreme barrier between what we know and what we feel…In a society that accepts plastic surgery as a social normative, how are we to decipher the real from the fake? the doctored and the original, the fake fucks from the true friends and if our feelings are reciprocated or unbalanced.

My earlier reference to Fuselli and the Nightmare serves a purpose for through the creation of sadness into a tangible piece of work, Fuselli achieved success. Whether the painting is about a lost love or the simplistic nature of a nightmare, Fuselli acted as an influencer in regards to twenty-first-century literature and film. Taming of the devil that rests upon the shoulders of the deceased, the uninhabited minds who walk the streets. Through his pain,  Fuselli had created beauty, and through his pain, he created a movement that inspired the creative production of others.

Onweerstaanbaar, global development and an interest in the fine arts; Owen entered my life like a tidal wave. Owen and I began communicating when I was at my worst…unable to move forward and in a mental plateau. Owen was simple, an edited novel so intricate in its detailing that I could not help but let me attraction prosper. Living on opposite sides of the spectrum, I have been taking each situation as a be-all and end-all; Show myself for who I am, the red wine loving writer so vulnerable to succession. Educated with a global perspective, Owen has reminded me that fear is natural. It is okay to be scared of what is to come, and it is okay to break down. While Owen may not understand his influence, he is both beautiful in mind and in the heart. How is it possible that I am falling for someone whom I do not know?

Watching you walk away was the day I thought I had died; it was the day that I lost myself and was left to fend on my own. The day you walked away marked the pivotal moment in time where I could relinquish my nightmares and set the devil free. I was looking for something more, for some sort of stability; something that held its place for more than just a month. I like to say that the day that you fall in love is the day that you lose rationalization; losing the ability to see without blinders, you continue on blurred behind mascara ridden eyes.

The blood red moon sits atop the skyline. Through a final embrace, I watch you walk away. 6 feet with eyes that could kill, the figure disappears into the darkness; A figure that would forever remain in my mind. Feeling a sudden onset of cold air, I feel undeniably alone. Lost in the badlands, I search for an excuse to escape. A goodbye can act as a chance to start again, a moment of clarity for your future. Fresh goodbyes and intricately painted lies, we start from the beginning once more.